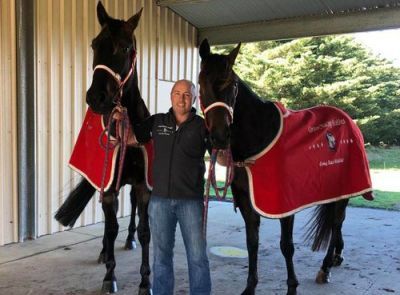 Passionate harness racing horseman Steve Cleave landed only his second-ever training double this week – six months on from his very first one, with remarkably the same pair of horses.

“I’ve had a lot of doubles as a driver, but training doubles have been a bit elusive,” Cleave said.

“It was exciting and extra satisfying because we bred them and they’re actually half-brothers.”

“While Tre Cool should develop into a handy sit-sprinter, I’m hopeful of Mirakuru going a long way. He has a lot of potential,” Cleave said.

The two previously saluted at Bendigo on February 5 this year – a belated birthday present the day after the astute trainer-driver’s 43rd birthday.

On or off the track, four-year-old gelding Mirakuru cuts an imposing figure, standing at an impressive 16.3 hands and consequently races in a massive 64-inch hopple.

Mirakuru strides to the line an easy winner at Maryborough

Cleave said it was always special when either Tre Cool or Mirakuru performed well.

“They are out of the broodmare Maximum Joy, which is named after my parents Max and Joy, who I lost in 1995,” he said.

The couple were tragically killed in a car accident on their way from Bendigo to Melbourne to watch their son compete in a Victorian Young Drivers’ Championship.

Cleave, with the support of friends, has certainly shown resilience and determination to push on from the tragedy and carve a name for himself in the sport.

“Along with my partner Lorraine, we have been steadily working on setting up a new place on 54 acres on top of the Great Dividing Range,” he said.

“The place was a blank canvas when we purchased it about 12 months ago, so we are slowly getting there,” he said.

“There’s now a 1000 metre track with a 13-metre incline over about 450 metres. That certainly means they do some work when they are jogging, but I’m rapt by the way it toughens them up.

“We will have a big barn, but I prefer to have good fencing and have all the horses live outside and be trained from the paddock.”

Take a look around the newly-developed Cleave property here:

The stable has five horses at the moment, but operating under the Cleave Racing banner, they hope to increase this through new owners.

Cleave said owners would be welcome to visit the property anytime and watch their horses being put through their paces.

“It really is fun and exciting to be involved, even more so when you get the joy of winning.”